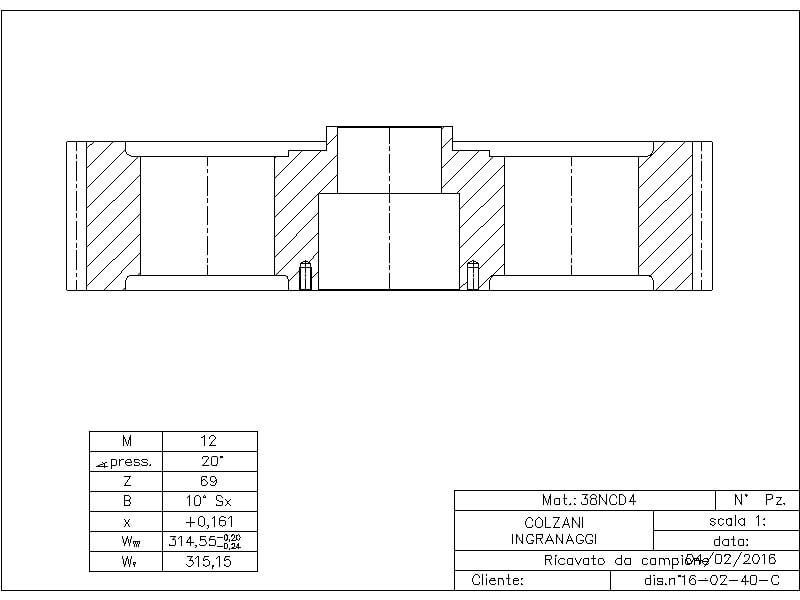 The power that can be transmitted by such means as wheels through friction is quite limited, 8 Kw at most, due to the impossibility of elevating the wheel’s normal pressure to any great degree. Greater power can only be transmitted by means of cogwheels.

The peripheral force that can be transmitted by the latter is no longer dependent on the friction coefficient and normal pressure, but on the cogs’ resistance as they mesh.

In order to transmit motion between cogwheels in a regular manner, the cogs need to come into contact without sliding friction, and transmission ratio needs to be constant. This is only possible if the pitch circle’s contact point is always where the two wheels join. This is true of the involute tooth profile.

In helical involute gears, teeth feature a constant B angle with the wheel’s axis: hence the constancy of pressure angle throughout gear engagement. Although flanks may appear rectilinear at first sight, they actually take on a cylindrical helix pattern.

The most significant consequence is that meshing no longer occurs simultaneously along the tooth’s entire length. On the contrary, contact shape is an ellipse and this contact ellipse moves along the tooth face as meshing takes place, from one end to the other.

Another major feature is the fact that as one pair of teeth meshes, they are not entirely released until another pair begins meshing.

Discover all our products